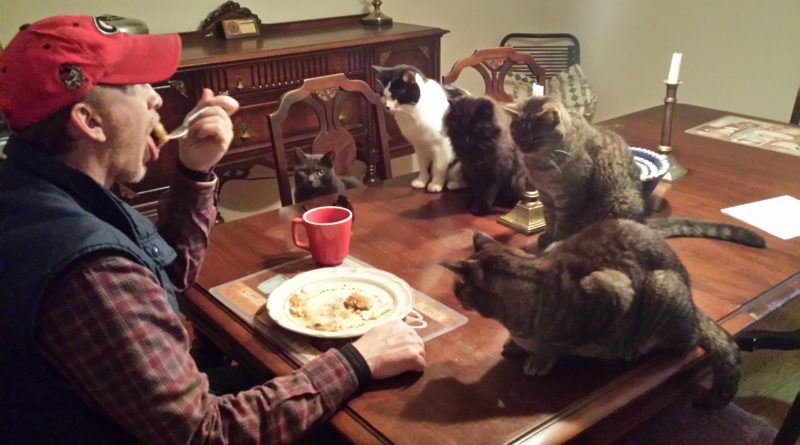 Crazy cat lady?  That’s sooo last century.  It seems that “Cat Men” are taking over the 21st century.  Countless articles have been written recently about this “strange phenomenon” (though I’ve yet to see one that has labelled any of these men “crazy”).  Sexy, perhaps, but not crazy.  In fact, the French Tumblr page Des Hommes et Des Chatons has become so popular, a printed book of photographs entitled Men & Cats was published in 2015 as an homage to sexy men and cute kitties.

And now a new book just out in April 2017, Of Cats and Men: Profiles in History’s Great Cat-Loving Artists, Writers, Thinkers, and Statesman, profiles some of the most famous cat-loving men through the ages.  Of course, none of these men are described as crazy — certainly not the statesmen, who are probably the craziest of all.

It’s certainly evident from the news that cat men have always existed.  It’s not a new trend.  I mean, come on, men have always been as “cat conscious” as women.  But how far into “the crazy” do we go in order to consider them “Crazy Cat Men?”  Just what are the Criteria for the Crazy Cat Man?

1.)  Taking them wherever you go, including to The Other Side — King Tutankhamen 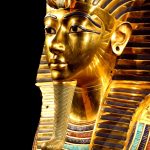 When King Tut’s tomb was opened in 1922, many cat-related artifacts were found inside, including a funerary bed in the form of lions, a “feline-footed chair,” a statue of King Tut riding on the back of a panther, other statues of domestic cats… the list goes on.  Even the pharaoh’s real cats were mummified and buried with him to keep him company.  Ancient Egyptians supposedly mummified cats to appease the gods, but who knows?  Perhaps Tut simply could not be parted from his beloved kitties.

2.) Dressing them up and snapping photos of them waaaay before it was trendy —  Harry Whittier Frees 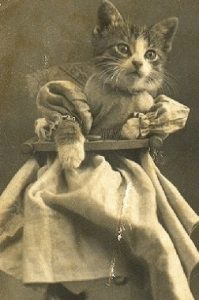 Naturally, humans began taking photos of cats not too long after photography was invented in the mid-1800s.  English photographer Harry Pointer (1822-1889) was the first person to take pictures of kitties in funny poses.  But it was American photographer Harry Whittier Frees (1879-1953) who decided to dress cats up in funny costumes before posing them, purely for entertainment value.  In fact, it could be said that he was originator of the very first LOL Cat Meme.  He often used props, set them up in “human situations,” and even captioned them.

This particular image is entitled, “What’s Delaying My Dinner?”  Images like these were used to create post cards and children’s books.  In his book entitled, Animal Land on the Air, he states “…the kitten is the most versatile animal actor, and possesses the greatest variety of appeal.”  I couldn’t get enough of these adorable pictures.

3.)  Renting them for the summer — Mark Twain 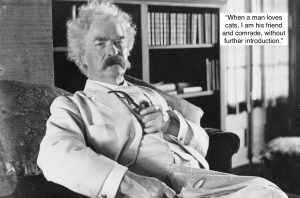 Mark Twain was a famous American novelist, but more importantly, he was a cat lover.  In her biography about her father, Susy Clemens wrote that Mark Twain was never without cats, even when he was traveling.  In 1906, he spent the summer in Dublin, NH.  Because he couldn’t be without cats for even that amount of time, he rented 3 kittens.  Even in the midst of dictation, he would stop and tend to them.  His daughter wrote: “The difference between papa and mama is that mama loves morals and papa loves cats.”

4.) Getting rid of everything you own and traveling across the country with one — Harry Coombes

This classic movie from the 70s won Art Carney an Oscar for his portrayal of Harry Coombes, an elderly New Yorker who is forced from his home when his building is condemned.  Everyone thinks they know what’s best for him, but Harry won’t listen.  He packs up his beloved cat and sidekick, Tonto, and they embark on a cross country trek that changes their lives forever.

5.) Taking all 9 of them for a stroll through the streets of Tokyo in a baby carriage — Masahiko Suga

This retired electronics company worker decided that his cats needed a breath of fresh air now and then (and also that his furniture needed a break from all the scratching).  Suga has been taking his cats out since 2014.   Passers-by began taking photos of him and his cats, and since then, he’s become a sensation.

Do you know any Crazy Cat Men?  Send us your stories and/or videos, and we’ll feature him on our website and Facebook page.

One thought on “Will the Real “Crazy Cat Man,” Please Stand Up?”