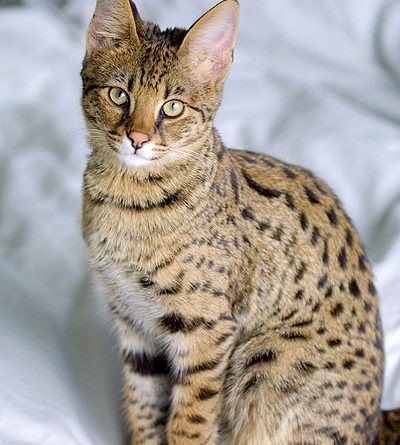 The feline has now been identified as a Savannah cat who, prior to his recent adventures, is presumed to be domesticated. It would seem the exotic pet escaped from his home.

The cat is in good health and as of all latest reports he is recovering nicely from the tranquilizer. He has been handed over to Wanaque Wildlife Freedom where he will be pampered until his owner has been identified.

Because this breed can cost up to $20,000, Wildlife Freedom plans on a thorough vetting process before handing him over to anyone claiming to be his owner.

Savannah cats can leap up to seven feet and can weigh up to 30 lbs. The breed was created in the 80’s as a cross between a domestic cat and an African cat known as a serval.

The featured photo of this article is a public domain image of a Savannah cat. If you’d like to see the actual cat, view the video below. Be warned: The video is not easy to watch if you are a sensitive person because the cat is drugged and netted.