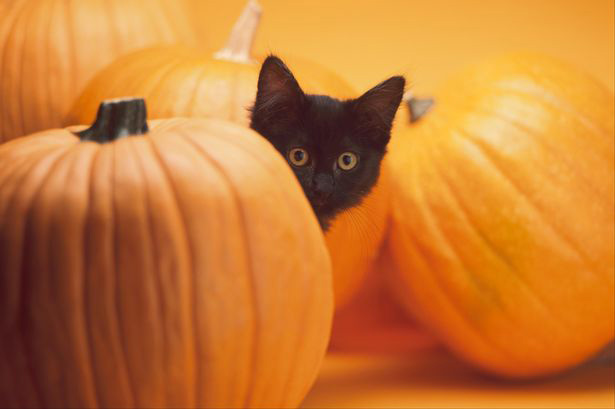 In Ancient Egypt, black cats were sacred. In the British Islands and Japan, they are considered to bring affluence. But, in the United States black cats have come to symbolize bad luck, misfortune, and curses stemming from beliefs held in medieval Scotland, France, Spain, and Germany.

There are several theories on how exactly black cats became a symbol for Halloween and it seems that no one is absolutely certain, but here are the two that seem most likely.

One US-Centric view is that the Puritan Pilgrims are the culprits. When actually, the Puritans brought their beliefs with them from Europe. They believed that black cats were sent by the devil as “familiars” for the witches and that witches could transform themselves into black cats and would even reincarnate as black cats. Needless-to-say, black cats did not fare well during the witch-craze.

But, before that, Scottish folklore has perhaps the most direct link. The myth says that a Cat Sith will bless an house that leaves out a saucer of milk on the Samhain, a Gaelic festival that takes place between sunset on October 31 and sunset on November 1.

Sounds good, right? Not exactly if you know what a Cat Sith is. According to Celtic myth, they are fairy creatures that appear as large black cats with a white spot on their chests. And here’s the kicker, they were believed to steal souls.

It seems black cats have had a rough go of it in most of the world, but I prefer the Ancient Egypt belief that this magical beast is sacred.